The World Bank Accountability Mechanism (AM) was created by a Resolution approved by the Board of Executive Directors on September 8, 2020.

The Resolution sets forth the role and functions of the AM, which comprises two constituent parts: the Inspection Panel, created in 1993 as the World Bank’s original independent accountability mechanism to carry out compliance reviews, and the Dispute Resolution Service (DRS), which facilitates a voluntary and independent dispute resolution option for communities and borrowers in the context of complaints to the Panel.

The AM and DRS became operational in July and October 2021, respectively.

In approving the new Panel Resolution, Executive Directors reaffirmed the importance of the Panel’s function, its independence and integrity. Panel Members continue to report to the Board and remain independent of management. They coordinate with but are not subject to the supervision of the AM Secretary.

In response to complaints from affected people, formally known as Requests for Inspection, the Panel has the power to carry out independent investigations of Bank-financed projects to determine whether the Bank is in compliance with its operational policies and procedures, and to make related findings of harm.

The AM and Inspection Panel resolutions formalized decisions made by the Board in October 2018 and March 2020 during its three-year review of the Panel’s toolkit that began after the Bank approved its new Environmental and Social Framework.

The Board agreed to allow communities more time – up to 15 months after the closure of new projects – to file complaints and the gave the Panel the authority, with Board approval, to verify the implementation of Management Action Plans (MAPs) in some cases.

The Board also permitted the sharing of the Panel’s Investigation Report with complainants before it is considered by the Board to allow them to be more meaningfully involved in consultations on the development of the MAP, and authorized the Panel to provide advisory services in the form of lessons from its cases to support institutional learning.

Board Resolutions and Operating Procedures

Inspection Panel Guidelines to Reduce Retaliation Risks and Respond to Retaliation During the Panel Process, 2018

1996 Review of the Resolution

1999 Clarification of the Second Review

The Inspection Panel Inputs to the World Bank's Safeguards Review and Update Process, May 10, 2013.

Defining the Boundaries of a Project: Where Does Bank Accountability Stop? Lessons from Inspection Panel Cases and Beyond. Presentation at the WB/IMF Spring Meetings Civil Society Forum, April 18, 2013.

What We Do and How our Work Relates to Human Rights. Presentation at OPCS - Nordic Trust Fund, June 7, 2012.

The Issue of Consultation and Participation in Inspection Panel Cases. Presentation at the WB/IMF Spring Meetings Civil Society Forum, April 18, 2012.

Statement to the Board of Executive Directors Informal Meetings on "Use of Country Systems: Operationalizing the Approach" by Ms. Edith Brown Weiss, Panel Chairperson, May 20, 2004.

The Panel adopted the updated Operating Procedures in April 2014. These updated procedures, including the introduction of a new pilot approach to support early solutions, aim to make the Panel more accessible, user-friendly, and effective in responding to grievances and concerns raised by project affected people, while staying within the ambit of the Panel's governing framework. Please find the updated Operating Procedures here.

As part of this review, the Panel embarked on a targeted consultation process to create opportunities for dialogue with stakeholders who are interested in the Panel’s work and issues of public accountability of international financial institutions. This process included the Board of Directors and Management at the World Bank, and various external stakeholders such as former requesters, civil society organizations, representatives of other international accountability mechanisms, members of the academic community, former Panel members, and technical experts who have worked on Panel investigations.

The objective of this consultation process was to help identify areas where the Panel has the opportunity to enhance the effectiveness and efficiency of its operational work. One important goal is to make the Panel process more simple, user-friendly and accessible. While the targeted discussions and consultations have provided many valuable comments on the Panel process in general, it is important to note that this was an update of the Panel Operating Procedures only - within the ambit of the Panel's governing framework - and not a total review of its process.

The update process was led by the Inspection Panel and coordinated by the Panel Secretariat, involving the following key steps described below:

Phase I: Internal analysis of the existing Inspection Panel framework, and targeted discussions on the Panel process with external and internal stakeholders (completed: June - December 2011)

Internal analysis of the existing Inspection Panel framework (completed). The Panel carried out an analysis of its existing legal framework, to better understand the basis and boundaries for the update of the Operating Procedures. This provided an important point of reference for its consideration of an initial list of areas for targeted discussions, including:

Targeted discussions on the Panel process with internal and external stakeholders, June – December 2011 (completed). To facilitate and assist in these discussions, the Panel hired two consultants with expertise in the issues of accountability. The Panel, in turn, coordinated the dialogue with the Board of Directors, and has engaged in dialogue and discussions with Bank Management.

The Panel’s two consultants, Ms. Lori Udall and Ms. Jean Aden engaged in extensive meetings and discussions with the respective stakeholders and provided opportunities for dialogue and inputs to enhance and improve the Panel process and procedures. Both consultants have reported to the Panel on the full range of comments, ideas and inputs received.

Below are their summary report and the matrixes of comments they have received. 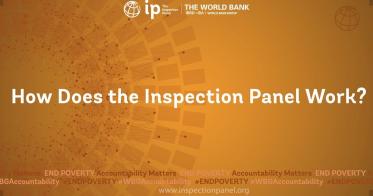