Imrana Jalal reflects on her tenure at the Inspection Panel 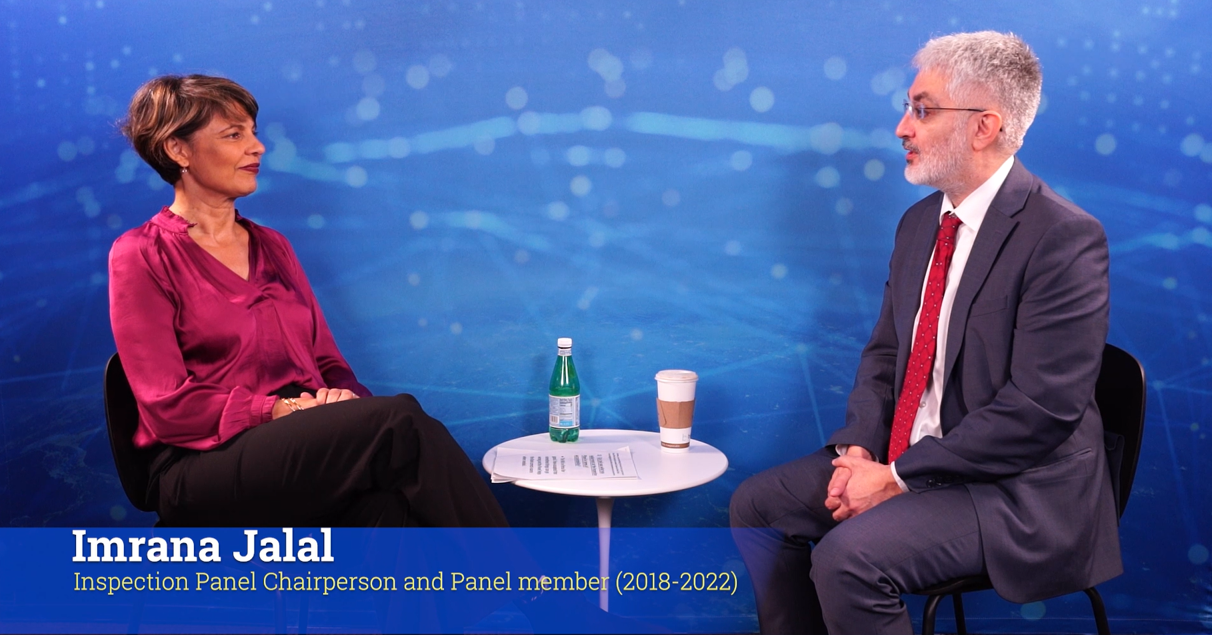 On December 31, 2022, Imrana Jalal’s 5-year term at the World Bank Inspection Panel, which she chaired for 3 years, ended. Serge Selwan, Senior Compliance Specialist and Policy Advisor sat with Imrana and discussed her experience during her tenure at the World Bank Inspection Panel. In this interview she reflects on her tenure, what she values the most about the Inspection Panel, and the highlights of her term. She also shares thoughts about her new appointment as head of the problem-solving unit at the Asian Development Bank, as Special Project Facilitator, a role she commenced on 6 January 2023. The video interview can be watched on YouTube here.

What is it you value most at the Inspection Panel in terms of accountability?

Imrana: Great question. So, you know, Serge I'm still one of the true believers who really believes that the World Bank and other development banks are a force for good. I know that banks get it wrong sometimes, but what's great is that accountability mechanisms like the World Bank Inspection Panel is here to course correct that we can actually fix things where our projects have had a negative impact on people.

It has been an amazing job to work on the other side of operations because prior to that I worked at the Asian Development Bank and that was working on straight development. This time I'm working in accountability for development. So, in a way, it's been a dream job to be able to bring all those parts of my career together into one job.

My work as a human rights lawyer previously, my work as a development practitioner and now as an Inspection Panel Member. So that's what I value most. It's been a very gratifying experience in every possible sense of the word.

What would you say were the highlights of your time with the Inspection Panel?

Imrana: Okay. So, in terms of the overall goal of the Inspection Panel, which is to keep the World Bank accountable for the huge impact it has on the developing world, that for me is the most gratifying experience to see that that is a reality. So that's in terms of my overall happiness with the job I had, in terms of the highlights, I would say two highlights.

The first highlight was working on the Gender-Based Violence Advisory, which looked at two projects, the Uganda Road Transport Project and the DRC Republic of Congo Project, where the Inspection Panel found during the course of its investigation that there had been violence committed against women and girls. So, we took the findings of those two incredible investigations and we created an advisory out of it.

But not just writing about it. What was so wonderful was to witness how the World Bank changed. The World Bank actually underwent transformative change, fundamentally changing the way they worked on projects where there was a high risk of sexual assault and assault against women and girls. So, to watch that, for example, the risk assessment tool on gender-based violence that came out, that was incredible.

And to be able to say that the Bank fundamentally changed because of the work of the Inspection Panel. So, there was a direct link. And so, for me, that was incredible. And I have to say that I admire the way the World Bank responded to it, and they've gone through so many changes. One example is how employees of the contractors have to undergo SEA [Sexual Exploitation Assault] training and sign an individual code of conduct.

So that sort of thing was a direct result of the World Bank Inspection Panel's investigative work and its findings. The second highlight was the reforms that occurred, the tools that were added to the World Bank inspection toolkit. It was great to see those changes occurring. We saw the time extension for the time when a person can file a complaint against a World Bank project extended from not being able to file as soon as the project was close to 15 months after that. We saw the new tool of us being able to share the findings of our report with the complainants, before the World Bank approved the management Action Plan, which is a response to our findings.

These were tremendous changes. The other change that occurred, which was also excellent, was the new tool in the form of dispute resolution. So that was also a significant change because it allowed people to have very individualized remedies. Now I'm now in a position to say, having seen dispute resolution as a function and the compliance review investigation part of accountability, what I like about it is that dispute resolution function helps individuals find remedies.

Imrana: Well, I would say that two important things that I found out in the last five years, which is a shout out to the environmental and social specialists at the World Bank management, because I've seen how genuinely they respond to trying to fix the problems that we highlighted in our investigation reports. Secondly, I would like to see that going forward.

Having said that, going forward, I would like to see the Inspection Panel regain control of its resources again, because that's such a fundamental part of independence. The final thing I would say is I have been so privileged to work with the Inspection Panel staff, which I consider to be we working together as a family, Serge.

You know, I'm sure you've seen that. It's been a fantastic thing to watch and to recognize that the Inspection Panel staff, it's not just a job for them. They are genuinely committed to accountability and it resonates with their personal goals. So, it was a privilege to be part of that. Thank you.

Imrana, maybe one last question. Where to from here?